Liverpool’s Andrew Robertson has written a letter to personally thank a young fan for an exemplary act of charitable generosity.

Robertson stumbled across the gesture made by seven-year-old Reds supporter Alfie Radford on Twitter, and got in contact.

Thanks to @andrewrobertso5 for my lads letter and gift 👍🏻

Bigger story here is please everybody get behind @SFoodbanks #LFC pic.twitter.com/9lsZ9Ol444

Little Alfie saved up his pocket money and donated it all to a local foodbank – a cause close to the Scottish defender’s heart – after all, he forewent any presents on his 21st birthday and asked his friends and family to make donations to local charities instead.

As a token of his admiration, Robertson wrote to Alfie and sent him a signed Liverpool jersey – not one of his own, but one autographed by Roberto Firmino as, by Robertson’s own assertion, “no-one wants the left-back’s shirt”.

Here’s the letter in full… 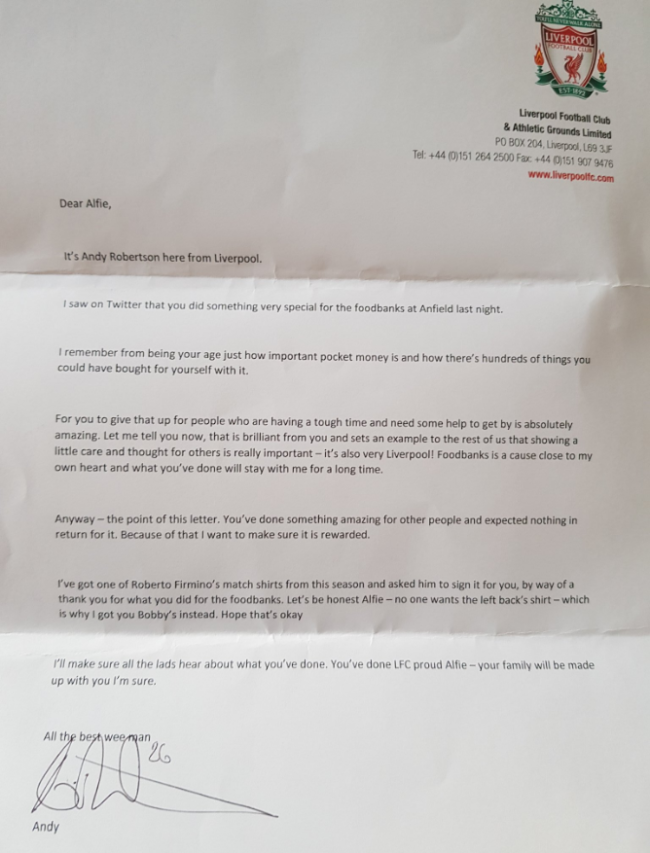 Alfie’s dad, Tom Radford, posted a photo of the letter on Twitter, along with an image of his son excitedly showing off his new Liverpool shirt.

Robertson was quick to reply, adding that a lot of people could stand to learn or thing two from the lad…

Glad he received it ok👍and couldn’t agree more!! A lot of people could follow in your sons footsteps! @SFoodbanks a cracking organisation👏 https://t.co/448T0Mvy3u

Exemplary stuff, from both parties.