As far as the PFA Player of the Year award is concerned, it looks like being a two-way dogfight between Liverpool goal-extruder Mohamed Salah and Man City’s orchestral conductor in chief, Kevin De Bruyne.

Of course, both have presided over fabulous Premier League campaigns and are fully deserving of the trinket in their own right – a fact that obviously hasn’t eluded De Bruyne.

In an interview with BT Sport as part of the build-up to Wednesday night’s Champions League ding-dong between Liverpool and Man City, De Bruyne was put on the spot about his POTY vote:

I voted for Salah because he deserves it. If it’s nobody from our team, I think Salah deserves it.

I wouldn’t know how to choose anybody else outside of Salah if it’s not (somebody from) our team.

I’m fair. If he wins, he wins. He’s probably up there with (Harry) Kane, with me, David (Silva). They are the four best players of this year, constantly.

I’m honest. I voted for him because I think he deserves it but if other people didn’t, I don’t mind. 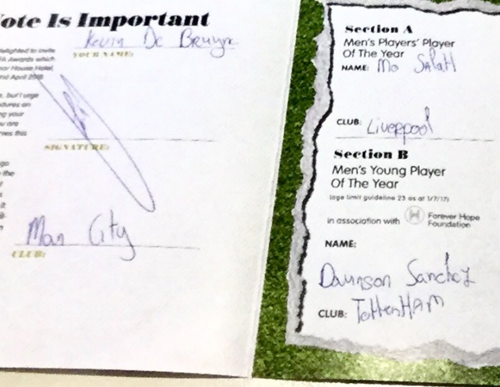 That KDB, eh? Great player, truly gifted and magnanimous to boot – but that handwriting is bloody lousy. All over the shop.

The full interview is available here, with the Player of the Year chat beginning at the 3:47 mark…

Go behind the scenes in Liverpool with #NoFilterUCL…

Access all areas ahead of tonight’s truly massive game…