It’s a period of Liverpool’s recent history that doesn’t seem to get mentioned much anymore, but the three-year ownership tenure of American businessmen Tom Hicks and George Gillett really did produce some memorable moments – even if they were all largely in vehement protest of the clueless Texan tycoons.

What began with banners at Anfield soon progressed to US flags being burnt and prominent fan websites encouraging fellow supports to don ski-masks and take up arms (well, baseball bats) in a radicalised attempt to “put the frighteners up” Hicks and Gillett and scare them out of the club. 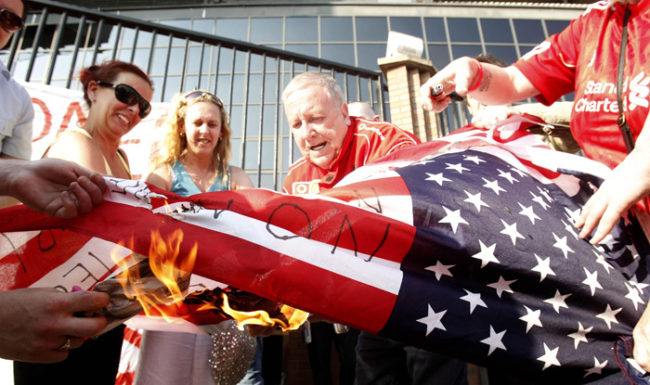 The project was the brainchild of Mike Jefferies, Reds fan and writer/producer of the Goal! movie series, who gathered as many celebrity Liverpool supporters as humanly possible to deliver a sobre, earnest message cheek-to-jowl with their non-famous brethren.

The video also caused more than a little consternation thanks to a somewhat over-zealous supposition from Echo & The Bunnymen singer Ian McCulloch, who exclaimed that having two unpopular Americans in charge of his football club was akin to watching his family getting raped.

With the combined weight and gravitas of Ricky Tomlinson, Sue Johnston, Jimmy Tarbuck, John Bishop, Gerry Marsden (of ‘& The Pacemakers’ fame) and the bloke from Phoenix Nights behind lumped behind the movement, the Dear Mr Hicks video proved enough to force the intended target out of the Anfield boardroom once and for all.

Quite why Mr Gillett escaped any of the flak remains a mystery to this very day.