While Alex Oxlade-Chamberlain is set to miss the Champions League final with a knackered knee, the Liverpool midfielder has gone out of his way to ensure that two fans will still be able to have the night of their lives.

Despite having their flights and accommodation in Kiev booked well in advance, Joe Jaggar and his four-year-old son Bobbi had resigned themselves to missing out attending the big game after missing out on match tickets in the official UEFA ballot.

Thankfully, just as Joe was preparing to break the bad news to Liverpool-obsessed Bobbi, in stepped his old mucker Alex to save the day… 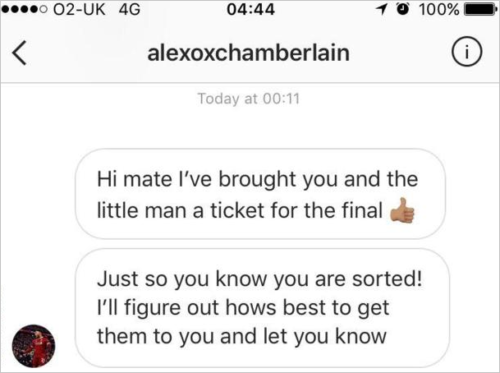 I went to bed on Friday night in a stinker of a mood. I fell asleep and woke up about 4:30am and scrolled through my notifications, when I saw two messages from Alex Oxlade-Chamberlain saying he had got me two tickets.

I started crying when I saw the messages. I’m not even ashamed to admit that. I couldn’t believe what lengths he had gone to for me and Bobbi.

Bobbi and The Ox have previous, as it was the youngster who managed to snaffle the Reds star’s shirt in the aftermath of the 2-1 win over Man City in the second leg of the Champions League quarter-finals back in April.

As many of you know, me and Bobbi (and jay and lola) have had an amazing season travelling the country following Liverpool this year. The highlight being when Alex Oxlade Chanberlain came over at the end of the European cup QF to give Bobbi his shirt. Despite having followed the reds home and away this season including trips to Hoffenheim and Rome, we weren’t guaranteed tickets for the final and were in a ballot with roughly 26,000 others. When the ballot was done on Friday, none of our four cards were successful and we faced the prospect of having no tickets even though we’d already booked flights a few weeks ago. After coming to terms with the possibility of travelling out there with no tickets I was taken totally by surprise when Alex Oxlade Chamberlain got in touch late Friday night to say that he’d got hold of a pair of tickets for me and Bobbi to ensure the little man gets there. As if giving him his shirt wasn’t enough, he’s just gone and blown us away with the generosity shown here. Can’t even find the words to say how grateful I am for what The Ox had done for Bobbi and myself.

Apparently, Oxlade-Chamberlain was made aware of the Jaggar family’s plight through Instagram and wasted no time in coming to their aid.

Describing the moment he realised what the Liverpool man had done for him, Joe added:

I tried waking Bobbi up but he was fast asleep, so my wife told him in the morning. He said ‘Really, dad? For the Real Madrid game?’. It will be his first European away.

He is Liverpool mad and after going to the games against Porto, Man City and Roma he was desperate to watch the final in Kiev.

There are no words to say what it means to us. Bobbi will never forget it – I’ll make sure he doesn’t.

Oxlade-Chamberlain is the most humble guy, and he doesn’t even realise that what he has done is such a grand gesture.

Alex just oozes class. He will never know how much this means to me and Bobbi. We are so grateful for his generosity.

Bloody triffic, except that part about the ooze.