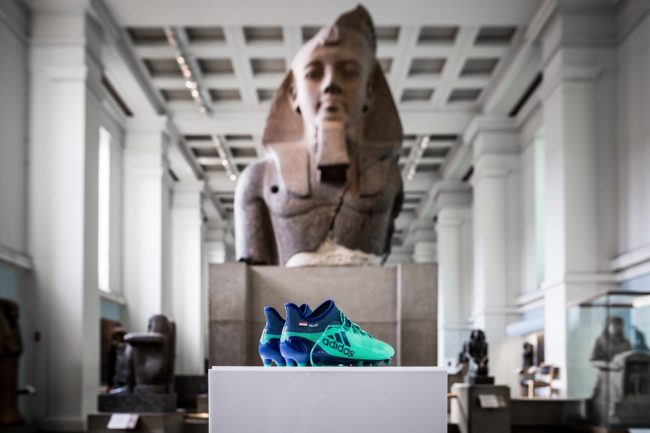 Such has been Mohamed Salah’s rise to prominence this season, the Liverpool forward’s work shoes have been entered into the prestigious British Museum as an item of cultural significance.

Specifically, a pair of Salah’s Adidas football boots have gone on display alongside statues of Pharaohs, ancient sarcophagi and the like as part of the British Museum’s exhibition of Egyptian artefacts and treasures.

Neal Spencer, Keeper of Ancient Egypt and Sudan at the museum, had this to say:

This acquisition brings the British Museum’s world-famous Egyptian collection right up to date.

The boots tell a story of a modern Egyptian icon, performing in the UK, with a truly global impact.

Displayed amidst the statues of ancient pharaohs, we now show the boots with which Mo Salah won the Golden Boot for Liverpool.

This acquisition builds on our recent project to acquire objects to tell the story of day-to-day life in 20th and 21st century Egypt.

From sport, to entertainment, worldwide trade to design, this collection is now accessible to all – like those from other periods of Egypt’s rich history.

The boots will be going on display next week in the run up to the UEFA Champions League Final, wherein Salah and Liverpool will be attempting to cap off a thrilling season by beating Real Madrid out in Kiev.

How about that then, eh?