Roberto Firmino came off the bench to plunder an injury-time winner for Liverpool against PSG in what proved to be a thoroughly entertaining start to their Champions League campaign.

Making his first ever start for the Reds in a Champions League fixture (in his seventh season at the club), Daniel Sturridge took half-and-hour to break the deadlock, creeping between two defenders to head an Andrew Robertson cross home from close range.

Sturridge was replacing Firmino in the starting line-up after the Brazilian suffered a ghastly (though thankfully not overly serious) eye injury during the previous game, Saturday’s 2-1 win over Tottenham.

Liverpool soon found themselves two goals to the good against their Parisian guests when Georginio Wijnaldum went dramatically sprawling over Juan Bernat’s outstretched leg in the box and James Milner neatly drove the inevitable penalty kick past Alphonse Areola.

PSG did managed to halt Liverpool’s momentum shortly before half-time when right-back Thomas Meunier reacted smartly to volley home a loose ball that popped up at the far post, and with his weaker foot too.

The Ligue 1 side were curiously inert for large swathes of the second half, with Liverpool’s energetic defence doing a fine job of keeping Neymar, Edinson Cavani and Kylian Mbappe on the back foot.

However, a sloppy misplaced pass from Mohamed Salah (who had flitted in and out of the game until that point) eventually allowed Mbappe in to scrabble a largely unwarranted equaliser in the 83rd minute – a goal which instantly brought a deathly, deflated chill to Anfield.

On a night of pulsating action there was to be one last twist in the tale, as Firmino left it until the 91st-minute to pull a winner out of the back, wriggling into a shooting position inside a crowded PSG area before rattling a low shot across Areola and inside the far post.

The forward then celebrated by covering the eye he also had manually removed by Jan Verthonghen three days before.

Of course, it goes without saying that the real star of the show was the Liverpool fan who, apparently having forgot his scarf, instead chose to improvise during the pre-match sing-a-long… 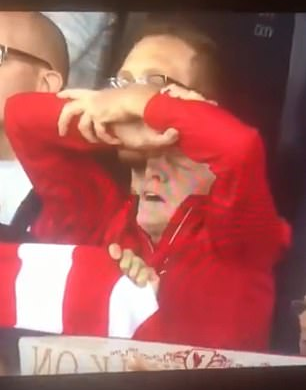