Liverpool finished the day top of the Premier League table after they cruised to a 4-0 win away to Bournemouth.

Mohamed Salah was the star of the show for the Reds, with the Egyptian netting a superb hat-trick.

The game saw James Milner rack up his 500th Premier League appearance, with the all-rounder starting in an unfamiliar right-back berth.

500 – James Milner will make his 500th Premier League appearance in this match, becoming the 13th player to reach this landmark. He is the 2nd youngest to do so aged 32y 338d, behind only Gareth Barry (32y 219d). Milestone. #BOULIV pic.twitter.com/8TVUcIrcoB

Salah opened the scoring on 25 minutes, firing home after Cherries’ ‘keeper Asmir Begovic had weakly parried a long-range effort from Roberto Firmino into the his path.

The goal stood despite Salah being in an offside minute when Firmino’s initial effort was struck.

The visitors were too good for a sloppy Bournemouth side and doubled their advantage early in the second-half, with Salah running at the hosts’ backline before slotting into the corner, despite Steve Cook’s attempt to bring down the attacker.

On 68 minutes, the Cook out through his own net, via a dreadfully mistimed attempt at a clearance, which saw him somehow back-heel the ball into the corner of the goal.

The goal of the game would come on 77 minutes, with the outstanding Salah racing into the box before bamboozling Begovic and slotting home to round off a fine individual display.

The game would end 4-0 to Jurgen Klopp and co, a result which sees them finish the day top of the table, after Manchester City’s surprise defeat at Stamford Bridge.

The Reds are now the only Premier League side still unbeaten this season, with a fascinating title battle ahead.

39 – Liverpool have won 39 points from 15 league games this season, their best ever start to a top-flight season. Momentum. #BOULIV pic.twitter.com/vPv8ORl0aH

After the game, the ever-affable Salah refused his man-of-the-match award, instead passing it on to Milner to mark his milestone appearance.

Pure class from the King 👑 pic.twitter.com/7rUyXFJyhT

As for Eddie Howe and Bournemouth, the absence of in-form striker Callum Wilson didn’t help as they once again struggled against one of the traditional big sides. 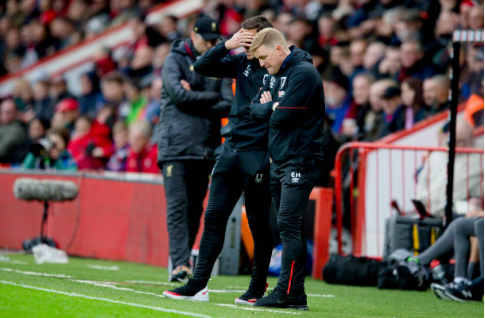