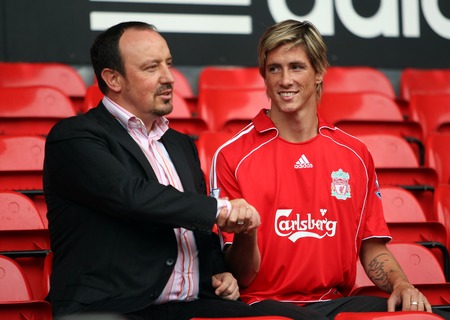 Put yourself in the shoes of Liverpool boss Rafa Benitez (just don’t complain if you’re not the same shoe size). You’re desperate to break the Chelsea/Man Utd Premiership axis of evil, so you’ve spent big in the summer. You’ve got rid of Luis Garcia and Craig Bellamy and now have the following forwards to choose from for the new season:
Fernando Torres, Andriy Voronin, Peter Crouch, Dirk Kuyt, Ryan Babel
A pretty damn strong set of forwards, I’m sure you’ll agree. But who’s your first choice partnership? Torres hasn’t come to sit on the bench, Voronin looked pretty tasty in scoring two goals against Werder Bremen in a recent friendly (watch the highlights after the click), and Kuyt is a fans’ favourite. Crouch usually impresses when he plays and Babel is one of the hottest young talents in Europe. The question is, who would you start with (assuming Benitez chooses to start with two strikers, of course – he may want to start with one striker in the centre, with a couple of wide players on the left and right)?