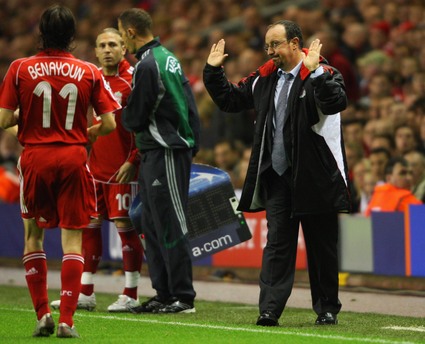 Stop it Rafa, stop it now. You’re being a very silly boy. Do you have OCD when is comes to rotating your squad? Because you can’t stop yourself, can you?
Benitez’s decision to leave out Euro specialist Javier Mascherano in favour of out-of-form Momo Sissoko and Seb Leto was very strange â€“ Mascherano is the glue that holds Liverpool’s midfield together in Europe, and it’s not like he’s played loads for Liverpool in the Premier League, so he should be fresh. Maschy was on the bench, but he never came on. Sissoko and Leto, on the other hand, were poor. But then so was Steven Gerrard, whose tepid performance seemed to be reflected in the sparse Anfield crowd’s subdued support.
That said, Marseille deserve credit â€“ no French side had won at Anfield before. And Mathieu Valbuena’s sweetly taken goal was good enough to win any game. Pepe Reina stood no chance.
Watch the goal after the jump. Well worth a click if you haven’t yet seen itâ€¦

Pick that out!
More Liverpool news and views at Liverpool Pies