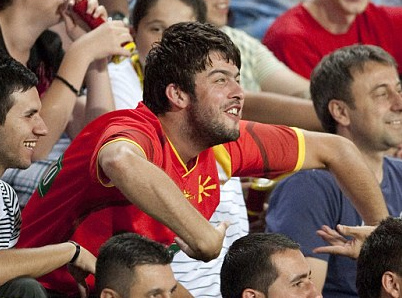 This racist Rabotnicki fan still lives with his mum. And he won’t have the internet yet, so I can defame him all I want. Look at his ‘special needs’ face!

Two goals by David Ngog earned Liverpool a comfortable 2-0 win in Macedonia last night, in Roy Hodgson’s first competitive match in charge of the Reds. Ngog looks sharp, which is a real bonus for Uncle Woy.

So the tie is over, but not before it was spoiled by a minority of Rabotnicki fans, who aimed monkey chants and gestures at Liverpool’s black players. I suppose this is what passes for entertainment in a two-cow, redneck nation like Macedonia. Idiots.

I hope Liverpool DESTROY them at Anfield. And I also hope Uefa grows some balls (doubtful, I know) and blast Rabotnicki with a fine bigger than Macedonia’s GDP. €25 ought to do it.