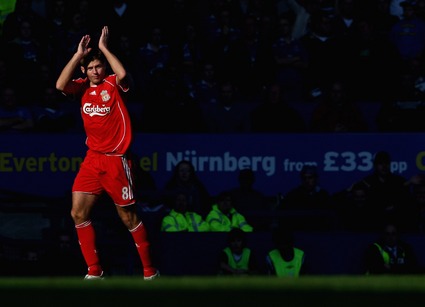 Not a great couple of weeks for Stevie G. He’s underperformed for England (including that missed sitter in Russia), been slagged off in The Guardian, and was substituted by Rafa Benitez in the Merseyside derby on Saturday. Gerrard’s reaction to being taken off was as follows: ‘I was hurt and disappointed at being taken off because, like I said, I’m a local lad and the derby means everything to me.’
If you paraphrase Benitez’s explanation for the substitution, then one could argue that Rafa concurs with our ‘headless chicken’ definition of Gerrard. Benitez said: ‘In this game, sometimes you need to play with the brain and we were playing with heart. We needed to keep the ball and pass the ball.’ Does that mean Liverpool’s manager thinks his star player is brainless? Based on that quote, you’d have to say ‘yes’.

Does all this mean the anti-Stevie G bandwagon is filling up? I have always thought it immensely unfair that Frank Lampard is routinely villified and Gerrard is revered. If you remember, your average football fan used to like Lampard. That stopped sometime after Euro 2004, and then the ‘Fat Frank’ tag started cropping up more and more often. Then Lampard had the audacity to win second place in some World Player of the Year poll (sandwiched between Ronaldinho and Samuel Eto’o, as I recall), and then the backlash really began in earnest.
Lampard has played poorly for England in the last couple of years, but then so has Gerrard.
Lampard may be more precious, more of a nouveau Chelski chav, and generally more annoying than Gerrard, but the Liverpool captain has some traits that bug me, not least his tendency to bully refs into giving cards (see Tony Hibbert on Saturday) and his penchant for ugly, two-footed tackles.
So is Gerrard the new Lamps? Is he the new scapegoat for English football? Answers on a postcard pleaseâ€¦