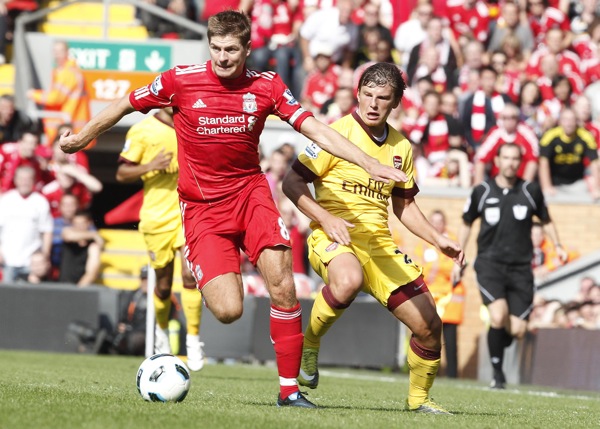 This game was very dull until Joe Cole was sent off just before half-time for a rash tackle on Lauren Koscielny – Cole’s wife Carly watched on in horror. Then something clicked for Liverpool and they actually seemed to play better without Cole after the break.

The second half was a lot of fun and I think both teams will, in the end, be content enough with a point each. First, David Ngog thrashed the ball past Manuel Almunia – flapping again – to give Liverpool an unlikely lead, before the usually reliable Pepe Reina fumbled the ball into his own net, with only seconds left. Oops.

Considering he’s put himself up for sale, I thought Javier Mascherano played really well, but then he might be in a ‘shop window’ frame of mind, rather than a ‘loyalty matters’ frame of mind. Steven Gerrard was in good form too, carrying on where he left off for England last Wednesday. Milan Jovanovic also endeared himself to the Kop with a lively and committed display.

Arsenal will be fine and I still think they’ll finish a couple of places above Liverpool, but a new keeper can’t come soon enough, whether it’s Shay Given or Mark Schwarzer: both will be a significant upgrade on Almunia.