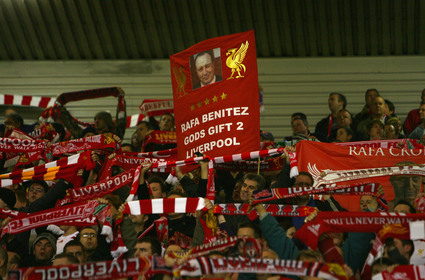 So Liverpool are still alive in the Champions League. They have to go to Marseille and win in their final game of the group stage, but I think they’re capable of doing that. Here’s what I learnt from the matchâ€¦
No.1 Fernando Torres was awesomely good. Because he’s fresh-faced, it’s easy to focus on his speed and skill and ignore his physical power. The boy has all the tools to go on and become the best striker in Europe in the next two seasons. Stevie G could have let him take the penalty for his hat-trick though.
No.2 The scoreline flattered Liverpool, who weren’t as impressive as last weekend, when they beat Newcastle with embarrassing ease. Still, as long as they keep winning, ‘Pool’s American owners will surely tolerate any little outbursts from Rafa Benitez.
No.3 Torres and Peter Crouch looked like an excellent partnership. Perhaps Rafa should think about playing them together from the start more often?
Watch highlights from the game after the clickâ€¦