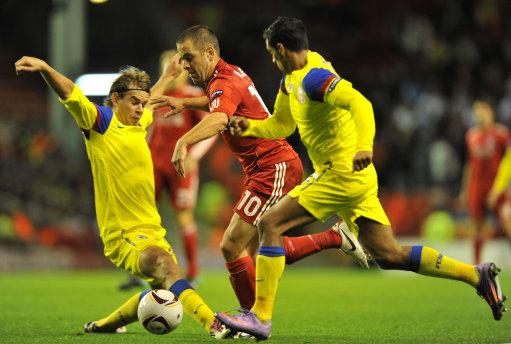 Proof, if proof were needed, that every silver lining has a cloud. Liverpool enjoyed an evening of fairly plain sailing at Anfield last night (despite resting their big guns), seeing off Group K rivals Steaua Bucharest in relative comfort thanks to goals from Joe Cole (an angled finish with just 27 seconds on the clock, making it the quickest European goal in Liverpool’s illustrious history), substitute Lucas Leiva and a brace from much-maligned striker David N’Gog.

Steaua managed a swift 13th minute reply to Cole’s opener, captain Cristian Tanase equalising with a deft clip over the on-rushing Pepe Reina, but faded badly after N’Gog restored Liverpool’s lead from the spot ten minutes into the second half – with two further goals in the last ten minutes ensuring that the home side ran out as comfortable victors.

However, despite their team’s confident display on the pitch, there were rumblings emanating from the boardroom that failed to instill Liverpool supporters with much confidence.

According to this morning’s Guardian, Tom Hicks flew into the city last night to begin negotiations over the re-financing of the loans he and fellow Liverpool co-owner George Gillett took out to buy the club back in 2007 – meaning that the rootin’ tootin’ tycoons are seemingly trying to cling on to their controlling stakes, despite the Royal Bank of Scotland (their current lenders) putting a deadline in place for them to ‘put up or p*ss off’.

The RBS have issued an October 6th deadline, by which time they expect the American pair to fully repay outstanding loans that totaled somewhere around the £285 million mark at the last count – or face the prospect of the bank seizing control of the club and it’s assets.