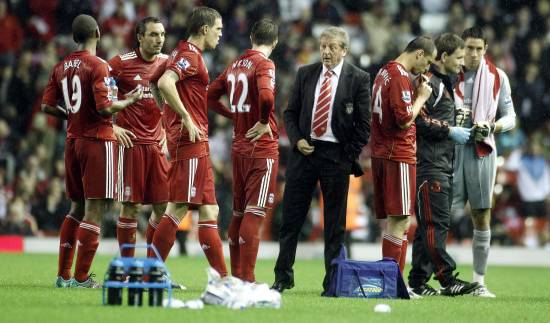 Liverpool manager Roy Hodgson has apologised to the club’s supporters for last night’s dismal Carling Cup exit at the hands of League Two side Northampton Town, accepting that he and his players must take full responsibility for their woeful display at Anfield.

Hodgson gave many of his reserves a run-out, but his selection still included many first-team regulars including Daniel Agger, Lucas, Ryan Babel, David N’Gog and summer signing Milan Jovanovic – the latter opening the scoring in the 9th minute.

Northampton then levelled the tie ten minutes after the interval through Billy McKay‘s instinctive finish and went on to take a deserved extra-time lead when Michael Jacobs fired home following a goal-mouth scramble.

It wasn’t until four minutes from time that N’Gog managed to force penalties by flicking a far-post header past Chris Dunn in the Northampton goal, however the Frenchman wasn’t quite so lucky during the shoot-out as first he, then youngster Nathan Ecclestone missed their kicks allowing Abdul Osman the privilege of securing the Cobblers a spot in the fourth round.

After the game, Hodgson spoke dolefully of his side’s performance;

“I don’t think we came anywhere near what I hoped to see apart from in the last 15 minutes of extra-time when we made a superb effort after going 2-1 down. When it goes to penalties and you are at home and in front of the Kop your hope is that at least the players will have the composure and confidence to win the penalty shoot-out but we didn’t.

All I can do is congratulate Northampton and apologise to everyone; the fans came expecting to see us win and I expected us to win but it wasn’t to be.

When you walk through a storm…