Duncan Oldham, the editor of Liverpool fansite KopTalk, has attracted a lot of attention for posting an article which encourages Liverpool fans to “put the frightners [sic]” on unloved owners Tom Hicks and George Gillett.

The ill-judged piece, titled ‘Get the baseball bats and ski-masks ready!’, implores Liverpool fans to exact vigilante justice on the American duo:

“If George Gillett and/or Tom Hicks remain in control of Liverpool Football Club come the end of the season, I will be calling for such action to take place.

“I will be urging every passionate Red out there who has a ‘set’ and who is capable of donning a ski-mask and waving a baseball bat in a menacing manner, to step up to put the frightners [sic] on these two and everyone they associate with – including any companies that support them.

“I am sick to the back teeth of hearing about petitions and email campaigns. While the efforts must be applauded and acknowledged, the only action that I believe will work is militant.

“Disruption, especially to financial institutions, is what they are scared of. And on a personal level, there’s nobody in the world who’s arse wouldn’t collapse if someone peered over their bed in the middle of the night armed with a Texas Rangers baseball bat or two.” 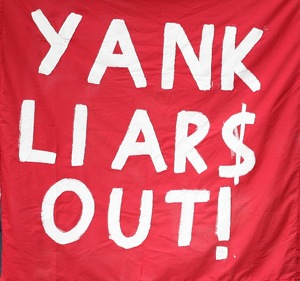 It reads like the sort of rant he wrote late at night, whilst encouraged by a jar or three. I can’t condone such aggressive militancy and neither should any self-respecting fan.

“They [Hicks and Gillett] are playing with the lives of so many people and it hurts me to see so many of my fellow Reds and fans so upset and destroyed. It has to stop and it will stop. I can’t sit back any more.

“I won’t sign petitions, I won’t send emails to journalists who don’t care, but I will get stuck in via other methods best not written about.”

This isn’t journalism, it’s dangerous and irresponsible rabble-rousing. There’s no place for it in football, and I say that as someone who fully sympathises with the intense frustration of Liverpool fans.