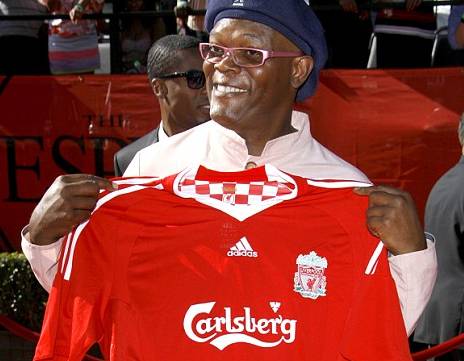 “I don’t wanna kill you, I wanna help you”

Troubled Liverpool fans can put their baseball bats and ski-masks away, because help is at hand – and from a fairly unlikely source.

A gaggle of Hollywood producers, directors and actors are planning to release a short film highlighting the supporters’ continuing protests against the club’s rootin’ tootin’ owners Tom Hicks and George Gillett.

Producer Mike Jefferies (The Goal! franchise) and casting director Dan Hubbard (Bourne Ultimatum, The Damned United) are heading the project which is set to get underway this weekend, and are hoping to persuade many of their ‘A-list’ contacts to get involved.

Actors Samuel L Jackson and Mike Myers, both ‘confirmed Liverpool fans’, are rumoured to have already signed up to appear in the viral campaign, with Jefferies promising to try and persuade many more ‘big names’ to nail their colours to the mast;

“You won’t believe who’s involved. I’ve been stunned by terrific reaction of so many celebrity Reds, and many, many fans want to be involved in the film too. It is important to get the message across that the fans want Hicks and Gillett out. There are millions of supporters who can not accept their club being touted as a product like a soft drink.

The viral is already building massive momentum and there is a real feeling now amongst the fanbase. But they don’t care, they don’t care about our club – except its valuation. By trying to refinance instead of showing some class and cutting a reasonable deal with someone and cutting his losses, Hicks is saying ‘f**k you’ to the fans.

So what should we say in reply? ENOUGH! The only way we can get him to change his arrogant mindset is to give him a bloody nose and embarrass him in front of his family, friends, business associates, investors etc.”

I can barely get my head around such pallid nonsense at this time in the morning, so I’ll just leave you with the salient details…

Jefferies and Hubbard will be based at the Hope Street Hotel in Liverpool city centre from 10am-6pm on Saturday, and 9am-noon on Sunday – should any of you want to go along and record your protest.