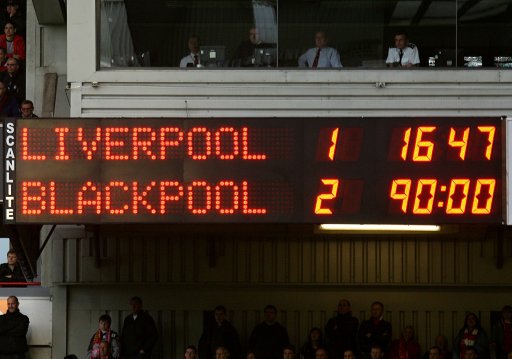 As you may be aware by now, Liverpool continued to plumb new depths at Anfield on Saturday after being well and truly bested by newly-promoted Blackpool, eventually losing out 2-1 thanks to goals from Charlie Adam and Luke Varney.

Greek defender Sortirios Kyrgiakos managed to net a consolation goal for Liverpool with a towering header, but the fact that it was just a ‘consolation’ should tell you all you need to know about their doleful displays of late – with manager Roy Hodgson even admitting that his side may be facing an unprecedented relegation battle during his post-match interview.

After analysing the game, Liverpool legend Alan Hansen described the players’ display as a ‘disgrace’, leading Dirk Kuyt (who was arguably one of the better performers on the day) to admonish the result as the worst he’d ever suffered since moving to Anfield in 2006;

“It was really, really disappointing. It’s probably one of the hardest defeats I’ve had to take since I’ve been here and we’re sorry for the fans.

The first thing we have got to do is make sure we start winning games again and then we can begin to take things from there.”

Liverpool started and finished the game in the bottom three of the Premier League and will have to stay there for at least the next fortnight as international games take precedent, with a Merseyside derby with fellow stragglers Everton to look forward to in their first game back.