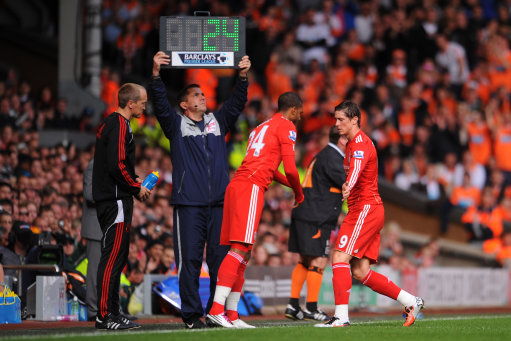 Liverpool have confirmed that Fernando Torres is a major doubt for the upcoming derby with rivals Everton on October 17th, after the striker was forced to limp off after just 10 minutes of their demoralising 2-1 defeat at home to Blackpool on Sunday.

The club’s medical staff have confirmed that Torres has once again strained an adductor muscle (as he did in the World Cup final this summer), with head of sports medicine Dr Peter Brukner delivering the following prognosis yesterday;

“Fernando was assessed earlier today at Melwood and underwent a scan this afternoon, he will have intensive treatment over the next couple of weeks but it is too early to say if he will be fit for the game against Everton.”

You can’t help but that if Liverpool had of invested in some worthwhile options upfront over the past three years, poor old Nando wouldn’t be in this seemingly cyclical predicament.

By the way, just to warn you guys that things may be a little slower than usual on Pies over the next couple of days as Ollie is away this week and I’m covering for him over on Goaly Moly.

As always, I’ll try and do as much as I can.