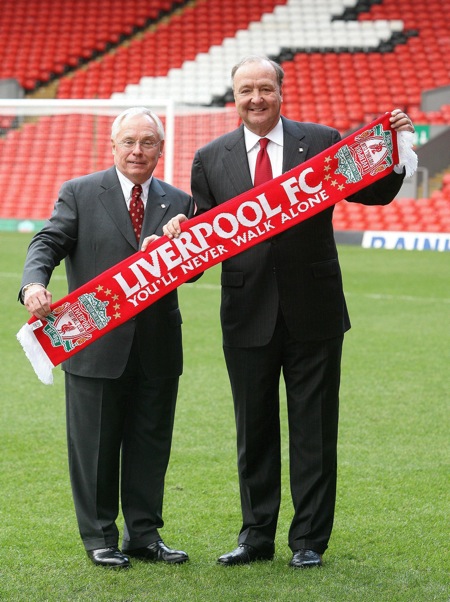 A couple of true soccer fans

Liverpool co-owner Tom Hicks has refused to recognise chairman Martin Broughton’s authority as he fights to prevent the sale of the club to the owners of the Boston Red Sox baseball team. Childish, yes, but not surprising by the Texan.

Broughton, appointed in April to oversee the sale of Liverpool, revealed this week that Hicks attempted to sack managing director Christian Purslow and commercial director Ian Ayre and install his own people (including his son Mack) in order to block a £300million deal with New England Sports Ventures (NESV also own the Red Sox).

That move was blocked by Broughton, who claims Hicks signed agreements not to oppose the sale when they received an extension to their refinancing deal with RBS.

Hicks and co-owner George Gillett stand to lose almost £150million if the NESV deal goes through. Most Liverpool fans would see that as karma for a couple of ruthless businessmen who masqueraded as fans in order to try and make a fast buck.

But this isn’t done yet and may be dragged through the courts. A spokesman for Hicks, Mark Semer, said that his boss disputed Broughton’s claim.

“There were no such undertakings given to Broughton, the board has been legally reconstituted, and the new board does not approve of this proposed transaction,” Semer told Bloomberg.

Hicks is either stupid or incredibly ballsy. I call the former. And I wonder how much Gillett has been involved in all of this – he’s been awfully quiet of late, perhaps happy to hide behind the more voluble Hicks.