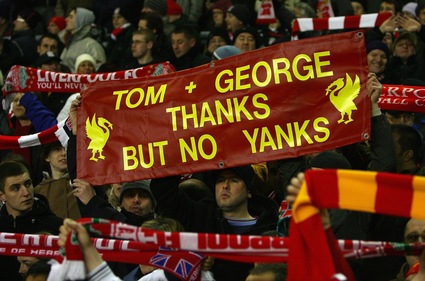 Photo Alex Livesey/Getty Images
Yep, it seems most Liverpool fans would be happy to ditch their ‘Yank’ benefactors, Tom Hicks and George Gillett â€“ if only because they could then return to baiting Man Utd fans about the Glazers. Even Steven Gerrard voiced his concern about the state of Liverpool FC last night, after his side drew 2-2 at home with Aston Villa – a result that virtually guarantees another season without the league trophy going to Anfield.
Talking about the rumours that Hicks & Gillett might sell their stake in the club to a Dubai-based investment company, Gerrard said: ‘It’s not just this week, it’s been going on for some time and it’s certainly not helping the playersâ€¦ I’ve got to be careful what I say, but it’s certainly not helping the team.’

Stevie G continued: ‘We know what’s going on, but as players you’ve got a job to do on the pitch and you try to put what’s going on off the pitch to the back of your mindâ€¦ But sometimes it’s impossible, when it is every day.’
From the outside, it’s impossible to know who to blame here. At the end of 2007, it became clear that Rafa Benitez was very agitated by the way he was being treated â€“ or the way he perceived he was being treated – by the Americans.
Hicks & Gillett have never gone out of their way to back Benitez, at least not in a convincing manner. If anything, they have undermined him â€“ it was folly to state publicly that they had considered bringing in Jurgen Klinsmann as head coach, even if privately Rafa had said he might leave. That was the moment when many Reds started to see their owners in a negative light. Since then, they have rallied around Benitez. He may be flawed as a manager, but he is their flawed manager. Rafa is a Red, and I don’t believe that Hicks & Gillett understand how much that means.
In my opinion, Hicks & Gillett have underestimated Liverpool Football Club from day one – they had little idea what they were getting themselves into. The club is much bigger than any individual.
Would prospective new owners Dubai Investment Capital be any better than the American duo? Maybe not, but as far as Liverpool fans are concerned, they couldn’t be any worseâ€¦