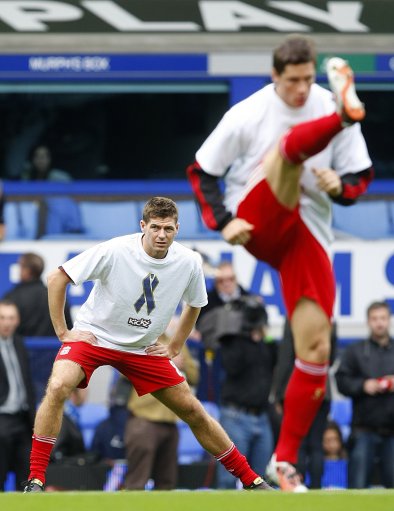 Liverpool manager Roy Hodgson has demonstrated just where his interests currently lie, by omitting both Steven Gerrard and Fernando Torres from the squad that will face Napoli in the Europa League tomorrow.

Hodgson will also be without the hamstrung Glen Johnson and Daniel Agger, who has a touch of the sicky poo-poos and has therefore ruled himself out.

Having slipped to second-bottom in the Barclays Premier League after losing out to Everton in the Merseyside derby last weekend, Hodgson has quite rightly decided to begin prioritising domestic games:

“I’ll leave some players out – that’s for sure. Some of the more important senior players won’t travel because their participation on Sunday (against Blackburn in the Premier League) is going to be so important to us.

I don’t think our squad is so strong that I can afford to risk them, but it’ll still be a strong team we put out there and I think it’s a chance for some players who have been on the fringes, like David Ngog and others like Ryan Babel who has had very few chances.”

Yet, out of the darkness came forth the light:

“Christian Poulsen has recovered and is okay.”

Hallelujah, and joy to the world!

As an aside, the plane flying Liverpool out to Naples later today will apparently be piloted by none other than Iron Maiden lead singer Bruce Dickinson, who rather surprisingly also does a fine line in aviation.