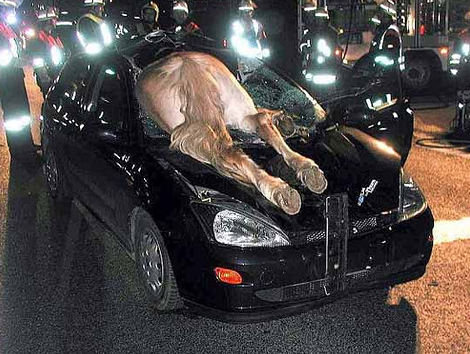 You know it’s just not going to be your night when, after being made to sit through the truly woeful first half of Liverpool’s 3-1 Europa League victory over Napoli, you suddenly get word from ‘downstairs’ that your £65,000 saloon has been besmirched by a horse’s arse…

From the Daily Mirror:

“A police horse sat on football ace Dirk Kuyt‘s car last night and smashed his wing mirror. The Liverpool star saw his motor damaged after parking near Anfield before his club’s 3-1 win over Napoli.

“A source said: The mounted officer had been helping patrol a group of Italian fans when the horse suddenly took a few steps back and ended up damaging Dirk Kuyt’s car. The police officer was very apologetic.

“Injured Dutchman Kuyt, 30, was commentating on the Europa League clash for Channel 5 and later told viewers: “A police horse just sat on my car”.

Puts me in mind of time whilst, on a jaunt to merry old Amsterdam, I was asked whether or not I’d like to see the ‘Dutch horse’…