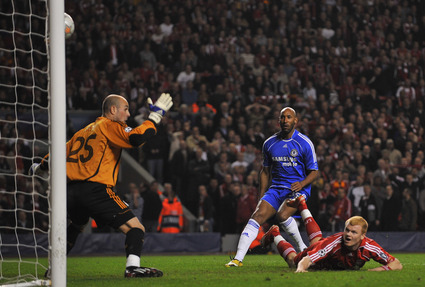 1 If John Arne Riise had a sensible haircut he probably wouldn’t have diverted Salomon Kalou’s cross into his net.
2 Fortunately for the two-tone craniumed Norwegian his blushes were at least partially spared. The evening’s most embarrassing moment was without doubt Tom Hicks attempting to sing along to You’ll Never Work Alone.
3 Chelsea are definitely in pole position to make the final now and they definitely don’t deserve to be.

4 Just as important as the Chelsea goal was Petr Cech’s injury-time save from Fernando Torres.
5 There were chances. Shots at goal in a Liverpool-Chelsea European tie. Result!
6 Ryan Babel will have a very big season next year. He really showed glimpses of what he is capable of last night and I expect to see more of that next campaign.
7 Didier Drogba has got a nasty case of Thierry Henry syndrome. His miserable, sulky, I’m-so-hard-done-by display was reminiscent of Tel’s final days with the Gunners.
8 Martin Skrtel is a very onomatopoeic defender. He just sort of skirtels round his own half cutting out passes and hoofing them out of play given half a chance.
9 Ollie and me are the kings of Pies predicts. Although Ollie did manage to ramble his way around to saying Liverpool would score first (even if he did contradict himself immediately!), so I guess we will have to declare him the official winner.
10 Avram Grant is going to take Chelsea further in the Champions League than Jose Mourinho could… but he will still be sacked.