So Liverpool have officially launched their new adidas home kit. And here it is… 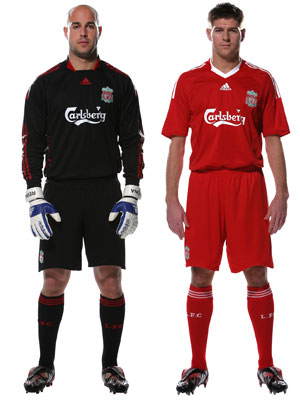 According to Liverpool’s official website, “The designs are already a big hit at Melwood, where the attention to detail and new V-neck are proving popular.”
Yeah, I can see Dirk Kuyt having such a conversation with Peter Crouch: “Ooh, Crouchy, I f**king love this attention to detail!” (funnier if said in a comedy Dutch accent)

Stevie G was roped in to deliver this quote about the new kit: “”I’m really pleased with the adjustments they’ve made. The neck is a lot better and there’s some lovely bits of detail.”
So the attention to detail has not been lost on Liverpool’s trendy captain. If he really did say that.
The kits, both outfield and goalie’s, will hit the shops on May 22. You can also pre-order it online.