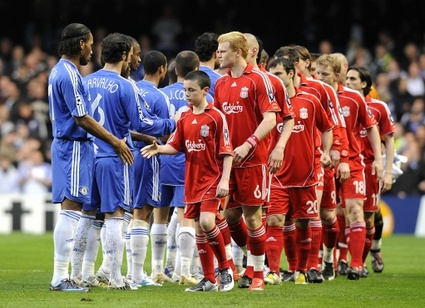 CHELSEA
Petr Cech Solid until Ryan Babel’s late late goal, which he really should have saved. 6
Michael Essien Started at right-back, but got involved in all areas of the pitch. An immense performance. 8
John Terry Not always convincing, but didn’t do too much wrong. 7
Ricardo Carvalho Like Terry, Liverpool’s attack gave him a few problems, but overall he had a good night. 7
Ashley Cole One of his most assured displays of the season. Nullified Kuyt. 7

Claude Makelele Not as bad as he was in the first leg, but he wasn’t great either – should have hacked down Benayoun before the Israeli had a chance to create Torres’ goal. 6
Michael Ballack The German is having a very strong finish to the season. Almost scored with a sweet free-kick and no doubt would have netted the penalty, were he asked to take it. 7
Frank Lampard Given the personal torment he has recently endured, I can only admire the way he stepped up to take the penalty. One of his better games this season. 7
Joe Cole A peripheral figure for most of the evening. 5
Salomon Kalou Ineffective for most of the game, although he did set up Drogba’s opening goal, so he can have an extra point for that. 6
Didier Drogba Whatever you say about the man, he is one hell of a footballer – when he puts his mind to it. He gave Liverpool’s centre-backs a torrid time and fully deserved his two goals. 9 MAN OF THE MATCH
LIVERPOOL
Pepe Reina Made several decent saves but he might have kept Drogba’s first goal out. Guessed wrong for Lampard’s penalty. 6
Alvaro Arbeloa A busy night for the Spaniard. His slip-up led to Chelsea’s first goal. 5
Jamie Carragher Plenty of rugged tackles but caught out for Drogba’s second goal. 6
Sami Hyypia Replaced the injured Martin Skrtel after just 20 minutes (so Skrtel gets no mark) and had a game to forget. Was done by Kalou for the hosts’ first goal and fouled Ballack for the penalty. 4
Jon Arne Riise Tried – and failed – to play offside for Chelsea’s third goal, which allowed Nicolas Anelka to tee up the Drog. A whole-hearted effort from a player clearly desperate to atone for his first-leg own goal, but things didn’t work out for him. 5
Javier Mascherano Anonymous for long periods of the first half and gave the ball away on several occasions. Did better in the second half though. 6
Xabi Alonso The game passed him by. Lampard and Ballack dominated the midfield battle and Alonso seemed helpless to stop them. 5
Steven Gerrard Average in the first half, very good in the second as he tried to drag his team back into the match. One of Liverpool’s best players on the night. 6
Dirk Kuyt Made almost no impact against Ashley Cole. 5
Yossi Benayoun A fantastic run to set up Torres, but didn’t do much else. 6
Fernando Torres A classic striker’s finish for his goal and tested Cech in the first half with a decent shot. Not much else to report. 6
Do you agree with Pies’ ratings?