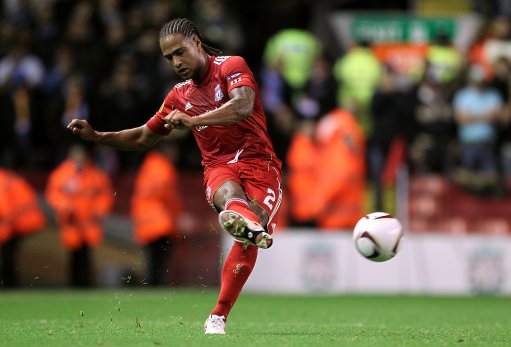 Personally, I’ve never been much of a fan of Glen Johnson. I just have the creeping suspicion that he has merely ‘lucked out’ throughout his entire career.

For example, he is currently England’s first-choice right back. Why? Not through any particularly outstanding talent, but through a sheer lack of competition.

I can’t think of a single English right-back that could feasibly challenge him for his spot at the moment or at any time in the near future, save perhaps Micah Richards, Sunderland’s Nedum Onuoha, Newcastle’s Danny Simpson and possibly, at a frankly ridiculous push, Everton’s Tony Hibbert (who everyone seems to think is Scottish anyway).

That’s it. They are the only other possible contenders that I can pull from my memory tank, and you’d struggle to brand any of them as being of genuine ‘international standard’.

There must be others out there. Someone half-decent must play there for the U21s! My brain tickles…

Anywhom, enough of this jibberish. Wayward Liverpool midfielder and former Victorian prostitute Alberto Aquilani (who is currently on a seaon-long loan with Juventus) has revealed to the Gazzetta dello Sport that Johnson, not Steven Gerrard or Fernando Torres, is the single Reds player that he would like to cherrypick from Anfield and have playing alongside him at the Bianconeri:

“What former Liverpool team-mate would I bring to Juventus? I wouldn’t want to offend some of my friends, but from Liverpool I would take Glen Johnson.”