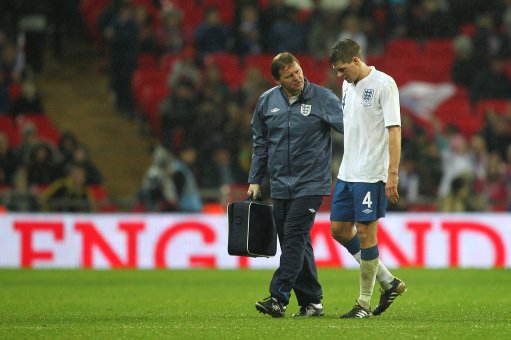 In an attack on the England management following last night’s 2-1 friendly defeat by France, Liverpool’s head of fitness and conditioning Darren Burgess immediately took to the internet to voice his ire at having to watch Steven Gerrard limp from the pitch in the 84th minute, posting on his Twitter account:

“Unbelievable from all associated with England and English FA with regard to SG’s injury. Completely ignored agreement and past history.

“Completely amateurish and now we pay for their incompetence. Absolutely disgraceful.”

“Stevie getting injured…more evidence if it was needed of why I hate internationals.”

Both sets of posts were deleted by midnight at the club’s behest, but England manager Fabio Capello still found time to respond, revealing that Gerrard was supposed to play for no more than an hour but was forced to prolong his involvement after Rio Ferdinand and Gareth Barry were withdrawn at half-time:

“We spoke with Steve and said he would play one hour but, after Barry’s injury we had problems. That was the reason he stayed on the pitch.

“If it’s possible, the players will play the time we agreed with the club. But Barry was injured so we needed someone senior on the pitch.

“We are upset about what happened to Steve, of course. He has a problem and we will have to wait for the scan. They asked that he play one hour if it’s possible but they can’t decide how long a player plays with the national team.

“If it’s possible, he would have played an hour. I understand why they’re upset, and I’m also upset.”

At this point, I’d usually make some kind of observational comment about the game itself but, seeing as my brain is still reassembling itself after falling apart through the sheer inanity of it all (save the fairly impressive Andy Carroll), I’ll have to save it for later on today.