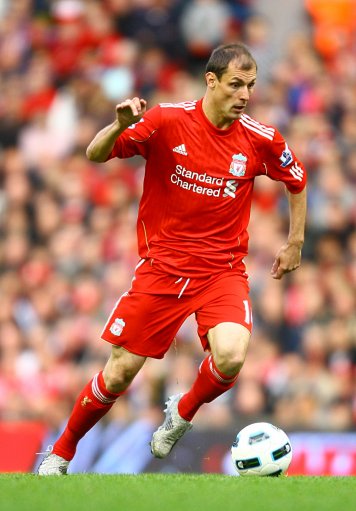 Serbian forward Milan Jovanovic has vowed to go into temporary international retirement until his rather lapse form at Liverpool begins to improve.

With a considerable reputation garnered during his time with Standard Liege and a half-decent World Cup under his belt, many though (me included) that Jovanovic would soon hit his stride at Liverpool given their relative lack of forwardly-mobile , but the stark truth is that the 29-year-old’s flaccid displays have seen him slip down pretty sharply in manager Roy Hodgson‘s estimation during the four months he’s been at Anfield.

After already being linked with a winter move away from the club, Jovanovic insists that he is prepared to fight for a place in the first-team at Liverpool, and that he asked not to be considered for his national team until he does so.

“Did I go to the airport to wish my friends good luck before the game in Sofia? No, because I didn’t want to be in the spotlight for nothing. This isn’t how I do things.

“I am 29 and I have a career which is quite good, but I know when I am not playing well and that is why I told my national coach (Vladimir) Petrovic that I don’t want to be called up until I am playing first-team football at Liverpool.

“This is the honest thing to do and I wouldn’t have it any other way.”

A bold gesture indeed but, alas I fear, an ultimately futile one. Given his Liverpool career to date, ‘Jova’ may as well just hand in his international papers at the door on the way out.