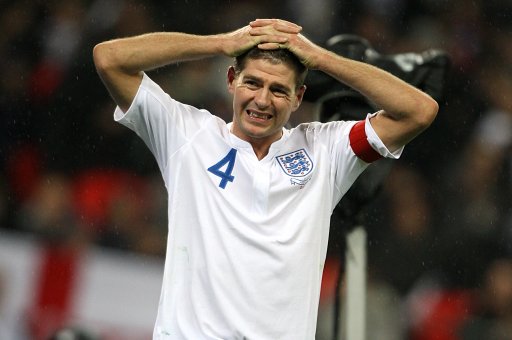 Liverpool are confident that captain Steven Gerrard will make his first-team return against Fulham at the weekend, after he successfully made it through his first ‘contact’ training session in a month earlier this morning.

Gerrard has been sidelined since twanging roughly £500,ooo’s-worth of hamstring on England duty on November 17th, though manager Roy Hodgson told the club’s official website that his skipper is making swift progress toward making his comeback:

“Steven’s on track for the weekend. He’s worked very hard to get back and [is the type of footballer] who hates not playing.

“Steven has been determined to get back as quickly as possible and the physios are happy with him and he feels quite good.”

Hodgson also admitted that, while he still has doubts over Gerrard’s fitness, he is reasonably assured that his influential hub will be ready to face the Cottagers on Saturday:

“The big question when a player has a hamstring injury or a slight pull is when do you actually say he is totally fit and give him the go-ahead to play?

“We have to be careful there is no risk of the injury reoccurring and I am in the hands to some extent of the sports science people as to when he can come back.

“I take their word for it and I can’t really push the subject because I would be devastated if we brought him back too early, but he still hopes he will be fit to play some part in the game against Fulham and so am I.”