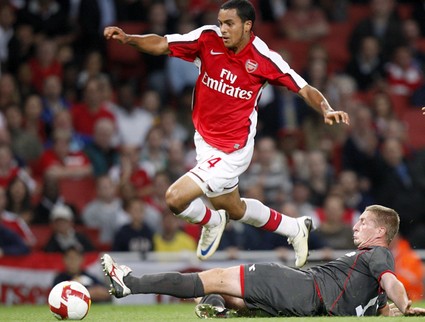 1. Liverpool have got problems. There is no fluidity or shape to the side and Rafa Benitez doesn’t seem to know how to turn the situation around.
2. The Reds could have had no complaints if Standard Liege had gone through. The Belgian side deserved their chance in the penalty shootout lottery, but Dirk Kuyt’s shin intervened.
3. Theo Walcott seems to be finally reaching his potential. He was outstanding all night for Arsenal and capped his performance with a wonderful goal.

4. I am hugely disappointed to see Steve McClaren’s side go out of the competition so early. Perhaps we could convince him to continue to conduct pre-match interviews even if his side aren’t playing?
5. The level of expectation of the Robbie Keane-Fernando Torres strike partnership has not yet been met. Some strike partnerships do not work immediately so we will give them the benefit of the doubt for now, but the lack of attacking thrust will be of worry to Liverpool fans.
6. Arsenal fans might have seen their season in microcosm this week. Defeat to Fulham followed by a free-flowing win over FC Twente could be indicative of an up-and-down season for Arsene Wenger’s young charges.
7. Dieumerci Mbokani of Standard Liege has some serious Horror Hair:

8. Liverpool’s off-field problems are now starting to have a serious affect on the pitch. A few personalities seem to have lost focus, including Benitez himself. Missing out on the group stages would have been the perfect opportunity for Gillett and Hicks to give him the shove.
9. Samir Nasri looks like he could be the latest graduate of the Arsene Wenger Finishing School. The Arsenal boss can make him the finished article. Expect him to be angling for a move to Barcelona in a few years!
10. I am glad Atletico Madrid have made it to the Champions League after an absence of more than ten years. It will be interesting to see Sergio Aguero and co pit themselves against top quality European opposition.