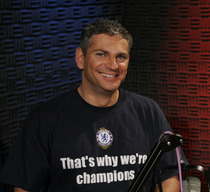 This grinning buffoon is Steven Cohen, the host of World Soccer Daily (WSD). WSD is the most popular football phone-in radio show in the States. God knows why it’s popular -Â it features way too many adverts and lots of inane buddy chat, mostly with his hugley annoying sidekick, Kenny Hassan, a brash Scot with a bully-boy stance.
Cohen, 46, was born in London but has lived in the States for 27 years, and served in the US Army for four years. He’s an ardent Chelsea fan, but he’s better-known – now, at least – for his dislike of Liverpool FC. He has admitted on WSD that he chanted “murderers” at Liverpool fans (a reference to the Heysel disaster)…