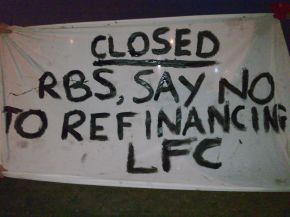 Angry Scousers attacked three RBS branches in the early hours of this morning in protest against the bank’s decision to refinance the Â£300m+ loan taken out by the club’s owners, Tom Hicks and George Gillett.
The doors of Liverpool’s main RBS branch on Dale Street were padlocked, while homemade posters reading “No to refinancing” were hung across branches in Hunts Cross and Crosby.
Could this be the work of the hardline “Spirit of Shankly” LFC supporters’ group? SoS denied any knowledge of the incidents. A spokesman for the group said:

“Whilst we are vocal against the refinancing of the club’s loan – we are encouraging our members to take a more diplomatic and sensible approach.”

It’s hardly the work of fearless revolutionaries, but Gillett seems to have got the message. He is set to sell the Montreal Canadiens ice hockey franchise to ease Liverpool’s financial concerns.
[@ Click Liverpool]