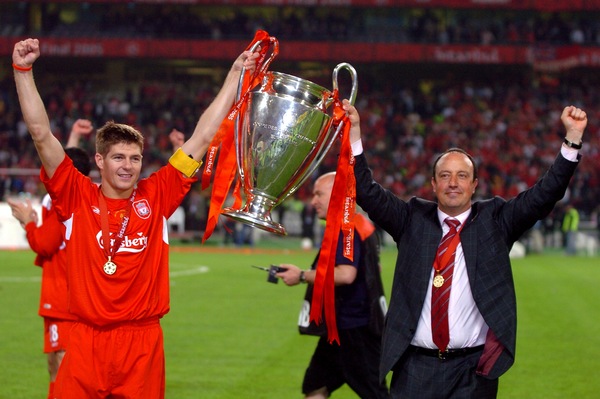 [Photo: PA]
Steven Gerrard trod the boards – for the first time, as far as I’m aware – at Liverpool’s Empire Theatre last night. Liverpool’s captain was in the audience to watch the opening night of ‘One Night In Istanbul’, a play about four Liverpool supporters who journeyed to Istanbul to watch the 2005 Champions League final.
Stevie G was accompanied by best mate Jamie Carragher, while Rafa Benitez and Sammy Lee also attended. The audience were shocked when the illustrious quartet shuffled onto the stage in the final moments of the play, each carrying a model of the European Cup and wearing a Justice for the 96 armband.
Gerrard, Carragher and Lee joined in with a closing sing-a-long, while Rafa kept his mouth shut but clapped along happily.
The Mirror’s website has pics of the night. And perhaps a shadowy, blurry video will show up on YouTube soon.