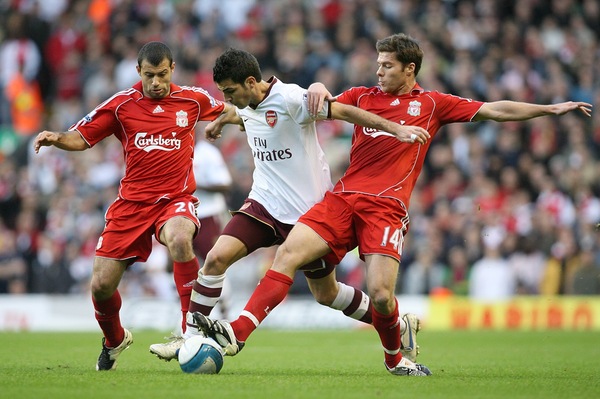 Worst-case scenario: Liverpool lose both Xabi Alonso and Javier Mascherano this summer.
Best-case scenario: Alonso and Maschy stay, obviously.
But, Liverpool fans, if you could lose just one of the pair (and I know that it’s more likely to be Alonso), who would you let go? Let’s look at the evidence:
Mascherano, 25, is a world-class defensive midfielder who protects the back four and the midfielders around him. In that respect, he’s absolutely pivotal. His football intelligence is immense and although he’s renowned for his destructuve abilities, he can play a bit too: his passing range is limited but he rarely wastes a ball and his shooting, while not powerful, is pretty accurate for a DM.
Alonso, 27, is more like a quarterback than the Argentine. His range of passing is superb, his vision greater than Mascherano’s. Xabi can breach defences with pin-point accuracy, whereas Maschy is more inclined to keep things as simple as possible (at Rafa’s request, no doubt). On the downside, Xabi is very slow. He gets away with it because he’s surrounded by more dynamic players who will run all day (Gerrard, Kuyt etc.). In that respect, you could call him a modern-day version of Jan Molby, albeit without the spare tyre.
Which of the two would Liverpool miss more? It’s a very tough call. They’d miss them both a hell of a lot, but I’m inclined to side with Mascherano, who is younger than Xabi and whose discipline really makes it easy for his team-mates to express themselves. Xabi is more likable, no doubt, but likability doesn’t win you trophies.
What’s your call?