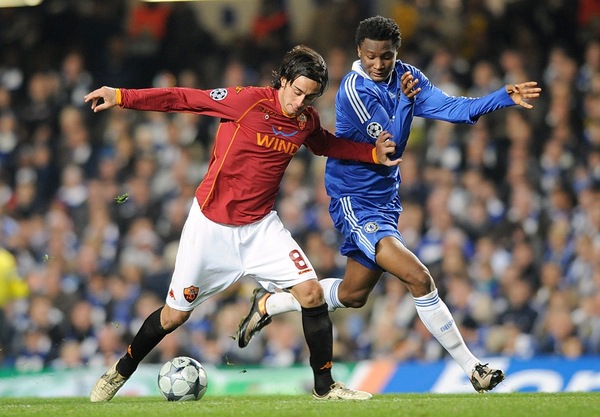 Alberto Aquilani, who is set to become Liverpool’s latest signing (subject to a medical), has played only 73 games in three seasons for current club Roma. His last appearance was on March 11, against Arsenal in the Champions League. Hmmm. Alarm bells going off…
For all Aquilani’s talent – he’s razor-sharp on the ball and his long-range shooting is superb – there must be major concerns about that patchy injury record.
So how will the Italian cope in Europe’s most physical league? Very difficult to say. Reports say he won’t be fit for the start of the coming Prem season, as he’s still recovering from an ankle operation he had in May. Not a good sign.

I notice that several newspapers, including the Guardian, herald Aquilani as a replacement for the departed Xabi Alonso. But Aquilani is no more a replacement for Xabi than if Rafa Benitez had signed another keeper to make up the numbers in his squad.
Alonso and Aqilani are totally different types of midfielder: the former is a quarterback who carefully picks his passes, the latter a bundle of energy who tends to play further forward than Alonso ever did at Liverpool.
I’d like to see Aquilani do well at Anfield, but my gut says he’ll be a flop who spends more time on the bench or in the physio room than on the pitch. What do you think?