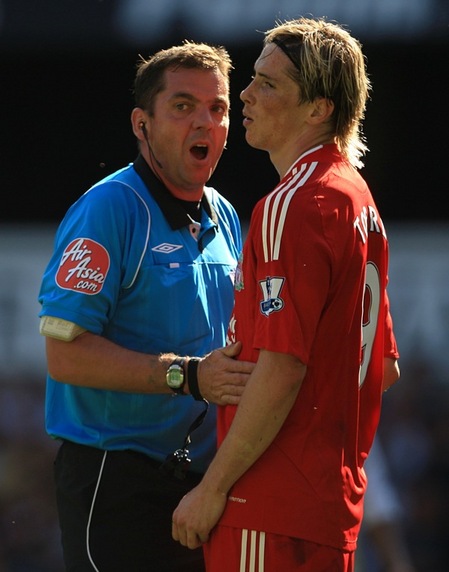 Fernando Torres’ job is to score goals. Simple, especially for a striker as talented as he is. Except Torres seems to have taken his eye off the ball (or, as Jamie Redknapp would say, “He’s literally taken his eye off the ball there, Richard”).
Torres cut a distracted figure at White Hart Lane on Sunday, arguing with the ref and confronting Tottenham’s players. So much so that Benitez has sent a public message to his star striker (his only decent striker, to be honest). The Fat Spanish Waiter said of Torres:

“I have told him that he has to stop this [reacting to provocation]. He knows he has to improve this aspect of his game. He has to be completely focused on his football and he knows that the way forward is to respond to any intimidation by scoring. Sometimes it is not easy to deal with everything opponents do, but he knows he must deal with it in a different way.
“In his first season he was really focused and I think he will do that again now. He knows he has to improve a little bit in these things. He is a star and the defenders are really worried about him, but that is part of the game now.”
Gentle criticism, but criticism nonetheless.
But is it Torres’ fault that he has no support up front and so gets isolated? No. That one’s on Rafa, who has somehow ended up with a forward roster of Torres, Voronin and N’Gog.
You reap what you sow, Rafa. You were the one who ditched Peter Crouch and Robbie Keane. You were the one who transformed Dirk Kuyt and Ryan Babel into wide midfielders.