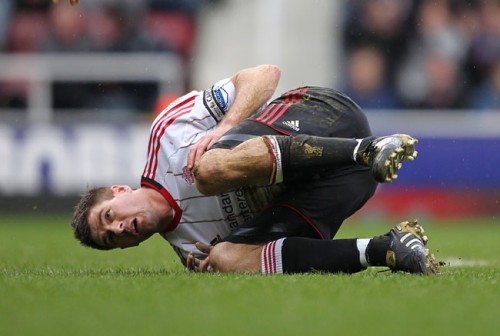 With Liverpool off to a superb start in the Premier League, and King Kenny Dalglish threatening to bring the glory days back to Anfield, could things get any better for the Reds? Well yes they could actually!

Kop icon Steven Gerrard is almost ready to return to full training, with Liverpool’s league clash with Tottenham on September 18th firmly in his sights for a first team resurrection.

Gerrard has been out of action with a troublesome groin complaint for all of five months now, and while his return to fitness will provide Dalglish with even more options in midfield, do we dare ask the question – will Gerrard deserve to go straight back into the first 11?

With Charlie Adam and Lucas Leiva providing a balance in the centre of midfield, and Henderson and Downing injecting more creativity into the middle of the park, just where will the 31-year-old Stevie G fit in? One option would be to deploy him in an attacking role behind Uruguayan hitman Luis Suarez, while £35million pound man Andy Carroll watches from the bench (along with the hard-working Dirk Kuyt, amongst others). However, would adding Gerrard to the mix be a case of too many cooks?

Obviously every successful team needs strength in depth, but one wonders whether Gerrard’s days as the main man at Anfield are now behind him?