Today marks the 30th anniversary of Bill Shankly’s death (in 1981, maths fans!), so to pay a wee bit of homage, Pies have amassed our 30 very favourite Shankley-isms – in no particular order… 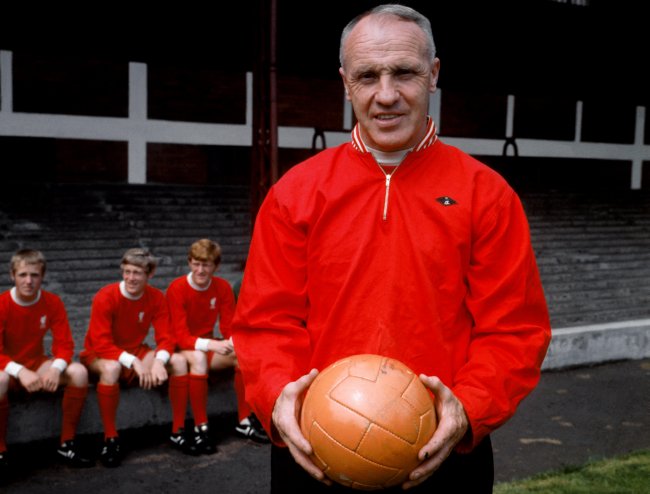 1. When asked by a Liverpudlian barber if he wanted ‘anything off the top?’, Shanks replied “Yeah, Everton.”

2. “Some people believe football is a matter of life and death, I am very disappointed with that attitude. I can assure you it is much, much more important than that.”

3. “If Everton were playing down the bottom of my garden, I’d draw the curtains.”

4. “We (Scotland) absolutely annihilated England. It was a massacre. We beat them 5-4.”

6. Talking to new-signing Alec Lindsay before a game: “When you get the ball, I want you to beat a couple of men and smash the ball into the net, just the same way you used to at Bury,” Lindsay replied: “But, boss, that wasn’t me, it was Jimmy Kerr.”

7. “A football team is like a piano. You need eight men to carry it and three who can play the damn thing.”

8. “For a player to be good enough to play for Liverpool, he must be prepared to run through a brick wall for me then come out fighting on the other side.”

10. “At a football club, there’s a holy trinity – the players, the manager and the supporters. Directors don’t come into it. They are only there to sign the cheques”

12. On Tommy Smith: “If he isn’t named Footballer of the Year this year, football should be stopped and the men who picked any other player should be sent to the Kremlin.”

15. “If you can’t make decisions in life, you’re a bloody menace. You’d be better becoming an MP!”

16. After beating Everton in the 1971 FA Cup semi-final: “Sickness would not have kept me away from this one. If I’d been dead, I would have had them bring the casket to the ground, prop it up in the stands and cut a hole in the lid.”

17. After Shanks reneged on signing his client, a disgruntled scout complained: “He has football in his blood,” to which Shankly replied: “You may be right, but it hasn’t reached his legs yet!”

18. On resigning: “It was the most difficult thing in the world, when I went to tell the chairman. It was like walking to the electric chair. That’s the way it felt.”

20. “I was the best manager in Britain because I was never devious or cheated anyone. I’d break my wife’s legs if I played against her, but I’d never cheat her.”

22. “The trouble with referees is that they know the rules, but they do not know the game.”

23. “Football is a simple game based on the giving and taking of passes, of controlling the ball and of making yourself available to receive a pass. It is terribly simple.”

25. “This city has two great teams – Liverpool and Liverpool reserves.”

26. “Of course I didn’t take my wife to see Rochdale as an anniversary present. It was her birthday. Would I have got married in the football season? Anyway, it was Rochdale reserves.”

27. After being caught out putting ‘Anfield’ as his place of residence on a Brussels Hotel’s register: “But that’s where I live!”

28. “The problem with you, son, is that all your brains are in your head.”

30. “I’ve been a slave to football. It follows you home, it follows you everywhere, and eats into your family life. But every working man misses out on some things because of his job.”