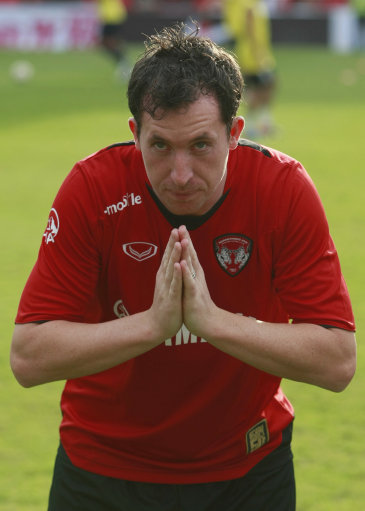 The Anfield hero and homophobic abuser of Graeme Le Saux is to take that big step from playing to managing after being named as Muangthong United boss.

Fowler joined the Thailand Premier League club in a playing capacity this year, signing a one-year deal, after knocking around the Australian A-League for a while. Muangthong United were knocked out of the Asian Football Confederation Cup recently, a defeat which encouraged the board to take action.

A statement from the club said: “The Board have appointed Robbie Fowler as the acting Head Coach and terminate the contract of Portuguese boss Henrique Calisto. The contract is until the end of the season and the team must adapt to long-term goals if it is to succeed in Asia.”

I imagine Fowler will be advising his players against recreating his infamous simulated cocaine-sniffing antics on the Anfield pitch in 1999. I don’t think the Thai authorities are too big on drugs, are they?

The cheeky young scoundrel got a four-match ban and was fined over £30,000  for this. (The quality of the video isn’t great but the celebration surely is!)