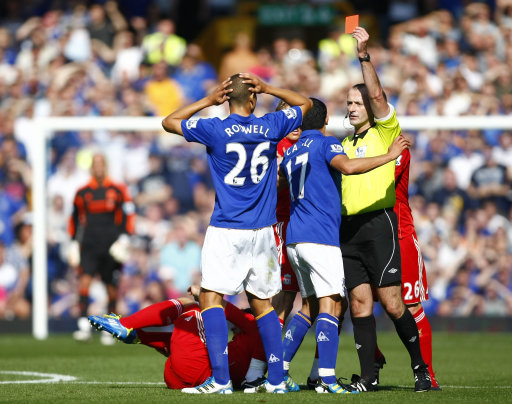 Forget all the hoo-haa over Amanda Knox’s new-found freedom, the big  story of law and order on Merseyside today is the decision by The FA to rescind the red card that Martin Atkinson brandished in the direction of Jack Rodwell in the clash with Liverpool at the weekend.

We all know it was a lousy decision by the notoriously card-happy Atkinson, indeed, if you watch the video carefully you can even see Rodwell make the international sign for a football, just in case the referee’s English isn’t up to scratch. However, now young Jack can rest easy knowing that he is free from that three-match ban. Atkinson, on the other hand, may well be officiating in the less glamorous surroundings of he Blue Square Premier League for the next couple of weeks for his sins.

Reports that an emotional Rodwell, when told the news, broke down in tears are simply used here for comic effect.