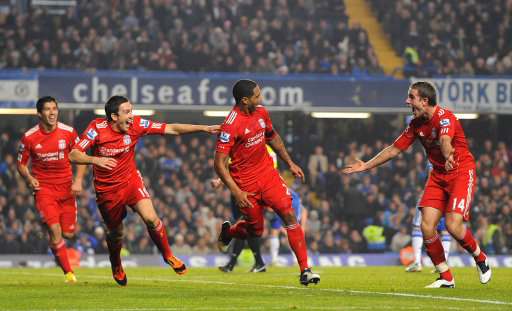 Andre Villas-Boas’ Chelsea side suffered their third defeat in four league games on Sunday afternoon, this time courtesy of a 2-1 loss to Liverpool.

The Blues produced a below-par first-half performance, with Liverpool’s Maxi Rodriguez putting the visitors ahead on 33 after a fine move involving Craig Bellamy and Luis Suarez. Indeed, Chelsea looked frail defensively with holding midfielder Mikel well off the pace.

The Blues did hit back in the second half, courtesy of substitute Daniel Sturridge, who levelled the scores on 55 minutes, as the home side grew in strength. However, it was that old curse of the ex-player which would finally make the difference, with former-Chelsea defender Glen Johnson netting a superb individual goal late on after a fine solo run.

With Chelsea looking anything but genuine title rivals to the two Manchester clubs, one wonders just what Roman Abramovich is thinking right now. Is AVB now in danger of losing his job?