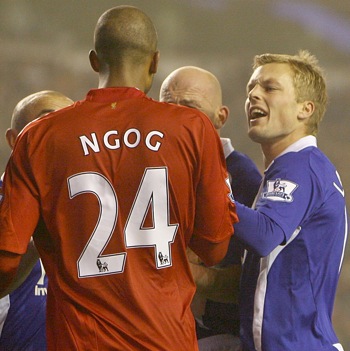 Oh dear. This wasn’t supposed to happen. I predicted a comfortable Liverpool win, and when David Ngog scored early in the first half, I thought my money was safe.

But no, my money was in great peril. This Liverpool team is an unpredictable beast – though I should have known better than to bet on a team missing Gerrard, Torres and Carragher – and after some terrible defending (© Alan Hansen) for the Blues’ first goal (Benitez had to score against Benitez), and an inspired finish by Cameron Jerome for their second, Liverpool were well and truly in the shit.

Step up David Ngog, again… The big talking point of the night – apart from how toothless Liverpool looked – was Ngog’s blatant dive to win a penalty. It was a shameless act of cheating by the young Frenchman, and of course the tabloids have gone overboard about it, screaming ‘CHEAT!’ Would they do the same if it was Gerrard who dived? I guess so, but probably with less vigour.

Gerrard slotted the resulting spot-kick and Liverpool escaped with a draw they just about deserved. Any title contenders would expect to beat Birmingham at home, but it’s very clear now that Liverpool are not the title contenders so many experts had predicted before the season started.

So is it time for Rafa to go? Not yet, but his stock has not been this low since he took the job back in 2004.