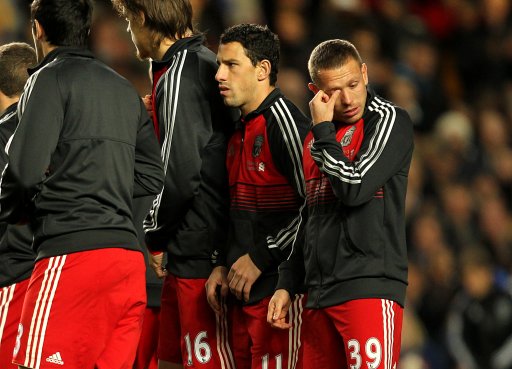 Kenny Dalglish enjoyed his second win at Stamford Bridge in just 10 days as Liverpool ran out comfortable 2-0 victors in the quarter-finals of the Carling Cup on Tuesday night.

Both Chelsea and Liverpool put out fairly strong sides, with Bertrand, Romeu, McEachran and Lukaku the youngsters given starting berths by Andre Villas-Boas, while Sebastian Coates, Martin Kelly and Jay Spearing got the nod for the Reds.

£35million flop Andy Carroll missed a penalty in the first-half but Liverpool thoroughly dominated throughout, with the visitors eventually scoring both goals in a five minute spell after the break, courtesy of strikes by Maxi Rodriguez and Martin Kelly. Chelsea’s very own megabucks disaster, Fernando Torres, once again failed to perform for a Blues side that couldn’t retain the momentum from their 3-0 weekend win against Wolves.

Craig Bellamy, a close friend of Gary Speed, returned in style to the Liverpool side and had a hand in both goals. However, in-form midfielder Lucas was carried off on a stretcher with a knee injury which doesn’t look good.

A delighted Dalglish has now met Chelsea 13 times as Liverpool boss and never lost. Andre Villas-boas, on the other hand, will have his mind on next week’s key Champions League clash with Valencia.