So, West Ham unveiled their new mascot ‘Hammerhead’ before their 1-0 win over Barnsley at Upton Park on Saturday…

Saints be praised, it looks like he’s got a back story too:

“Foundered in the Thames Iron Works many decades ago, the workers who crafted a new champion drew on the spirits of heroes old and new to create the ultimate goal machine.

As strong as iron, as fast as Billy Bonds and blessed with the goalscoring prowess of Vic Watson, some say Hammerhead was once a shipbuilder at the Thames Iron Works, while others say he is a knight from the historic Boleyn Castle.

When a bolt of lightning hit the Iron Works, a might warrior of iron was born – HAMMERHEAD.”

Looks like Optimus Prime’s slow, cross-eyed younger brother to me but hey-ho. “He was dropped on his head as an infant, and now he walks the streets of East London arguing with lampposts – DERPATRON…” 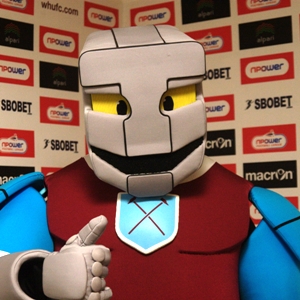 Got a Shit Lookalike for Pies? Email it to waatpies@gmail.com and stick ‘Lookalikes’ in the subject field or Tweet it over to us as @waatpies if you’re that way inclined.