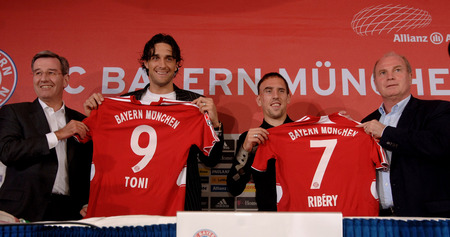 Standing next to Franck Ribery instantly makes any man look like a demi-godlike cross between George Clooney, Brad Pitt and that beardy fellow from 300. And indeed, Luca Toni does look like the most handsome man in the world in this photo. He’s a good-looking fella anyway, but next to Ribery he looks even more dark and tall and handsome, in a rugged sort of way.
On a footballing note, how did every top Premiership club let Ribery slip through their grasp? Arsenal were sniffing around him for a while but then they lost interest. I’d have thought that a club with a bit of cash to flash (West Ham, Liverpool, Chelsea natch) would have been very keen on the wrong-faced Frenchman. Toni and Ribery are very good signings for Bayern, who should be a team to watch in Europe next season.