Don’t ask us how, but Pies have acquired exclusive access to a page from the diary of one Mario Balotelli… 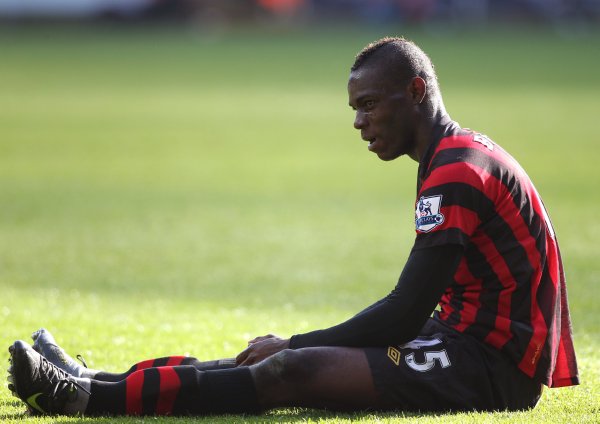 9:00am – I wake up when the antique musket I had installed in the bathroom is fired by the homeless man that I hired as my personal musket man. I give him £2,000 a week, he fires my morning musket and can help himself to as many Monster Munch as he wants. So many holes in the bathroom wall. The house always smells of smoke, which is better than the mandrill sh*t because there’s a mandrill in here somewhere. Unless it died.

9:12am – Carlos Tevez swears by a “whore’s bath” in the morning: a quick wipe of the undercarriage with a flannel – but I prefer a shower. Also, found the mandrill in a scary way. It scratched me but thankfully I am immune to disease I think. Got my silver dungarees on and a shirt made from clingfilm. Time to go to training.

9:45am – Stop off on the way to buy some petrol. This never goes well. Once again, I fill the Bentley up with Lucozade by mistake and have to hire a homeless man to drink it out from the tank with a cut-up hosepipe. I give him £5,000 and take him to hospital to have his stomach pumped.

10:30am – Pull into Carrington. A man the others call Wing Hargreaves waves through the window to me. I think he works in the canteen. Leave car unlocked with both doors wide open to let it air out a bit. I put the hazards on though – I’m not a complete animal.

10:32am – Someone tells me they’ve found an abandoned car in the car park. I have to say it is mine before they evacuate and call out the bomb squad. Old man Mancini wants to punch me in the head again!

11:05am – Carlitos takes me aside to tell me about this “whore’s bath” idea again. I’m sick of it and he always smells like a petting zoo on hot day. Seriously think about setting his snood on fire, but then start thinking about petting zoos instead. I wonder how many chinchillas I could fit in my glove compartment? Probably six.

11:45am – Me and Yaya stage a fight to trick the camera men on ladders outside. He has me in a headlock and is pretending to slap my face, but I show him what I’m made of and uppercut him straight in the cazzo! Ding dong! Mario wins by KO.

12:05am – Training’s done. Mancini said something about us looking at a tactics DVD for next game but I’m going home because I prefer “White Men Can’t Jump” and he never shows us that.

1:30pm – Get a call from my agent while driving home. He says that some little puta from Coronation Street is trying to sell – how you say? – a “shag-and-tell” story on Mario to the papers. I say I’ve never heard of this “Ken Barlow” woman.

2:30pm – Pass by Coronation Street and post a wasp’s nest through Mrs Barlow’s door as revenge. It is a moral victory. I do not celebrate.

2:45pm – Apparently Coronation Street is not a real street and I have just exposed a lot of innocent people to wasp stings. I will drop by a case of vinegar tomorrow to apologise. Could have been worse if I’d have gone with Plan A, which was to hand round a tray of ham sandwiches filled with drawing pins. Thank God I am so calm sometimes.

7:30pm – Wanted a glass of Ribena. Someone’s cat was in my kitchen, so I put the cat in the microwave for three minutes just because. Now the kitchen smells of burnt hair and I owe someone a cat.

10:15pm – Only about two hours until Babestation starts! My favourite thing about England! Until then I shall watch “White Men Can’t Jump” with the Japanese subtitles on. Just because.