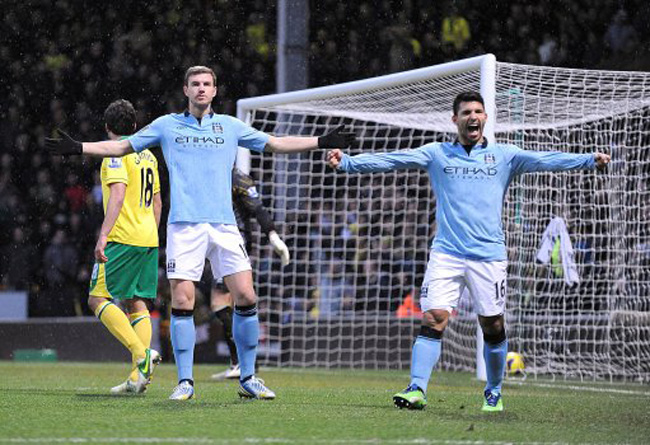 Manchester City bounced back from that shock defeat at the Stadium of Light by securing all three points at Carrow Road, albeit in  a less than comfortable.

Having gone two goals up, both courtesy of Edin Dzeko, City looked to be cruising to a simply away victory. However, an Anthony Pilkington free-kick (which deflected in off Gael Clichy) and then a contentious sending-off for Samir Nasri set up a dramatic second half.

Nasri’s sending off came after the French schemer squared up to Sebastien Bassong, although whether or not he actually headbutted the Norwich player, remained to be seen.

In the second period, Chris Hughton’s  Canaries had to contend with yet another early goal, this time courtesy of a lovely finish from Sergio Aguero. However, Norwich failed to lay down and die and brought the goal-margin back to just one courtesy of the unlikely figure of Russell Martin.

Edin Dzeko then saw his effort go in via the post and ultimately goalkeeper Mark Bunn as Roberto Mancini’s went 4-2 up. However, once again the side fought, again through Martin. But his goal was to prove nothing more than a consolation as City secured all three points from this most dramatic of clashes.