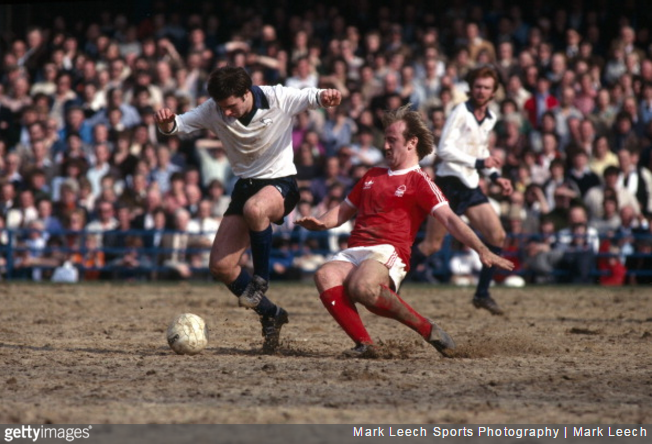 The hideous ‘turf’ at the Baseball Ground can be seen here in all its splendour as Derby and Nott’m Forest do battle, 1979

Derby were in the midst of thrashing Man City in the First Division when they managed to win themselves a penalty kick. What followed was what’s commonly referred to in the trade as “an absolute bloody palaver”.

Already 3-0 up at the time, it was Rams midfielder Gerry Daly who took responsibility for dispatching the spot-kick. The only hitch being that the spot itself had completely disappeared amid the churned furrows of mud that was passing for an 18-yard box.

After City goalkeeper Joe Corrigan received a yellow card for cheekily attempting to help pace out 12 yards, on trundled the saviour of the hour – Derby groundsman Bob Smith, armed with a tape measure and a bucket of white paint…

As can be seen in the video above, Daly buried the penalty – the fourth and final goal in a 4-0 rout for Derby.

We’ll never turn our noses up at artificial turf again.