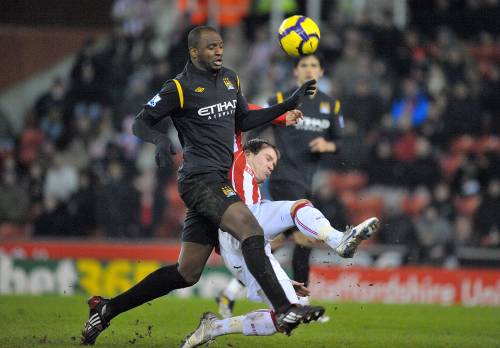 Vieira and Whelan shortly before ‘Knackers-gate’

Manchester City midfielder Patrick Vieira is facing a three-match ban after reacting badly to a challenge by Stoke’s Glenn Whelan during Tuesday’s hard-fought 1-1 draw at The Britannia Stadium.

The 33-year-old Frenchman clearly kicked out at Whelan after being knocked down – studding the Stoke man between the legs – and The FA have now charged Vieira with violent conduct after studying video evidence of the incident.

The clash left Whelan thanking the man upstairs for what he gave him (or in this case, didn’t give him), remarking after the game;

“Thank God I am not more well endowed. Maybe if I was a bit bigger it would have hurt more.”

Which just goes to show – honesty is not always the best policy.

Vieira has until the end of today to lodge an appeal against the charge but will probably accept the punishment, rather than risk increasing his suspension by contesting the ruling.